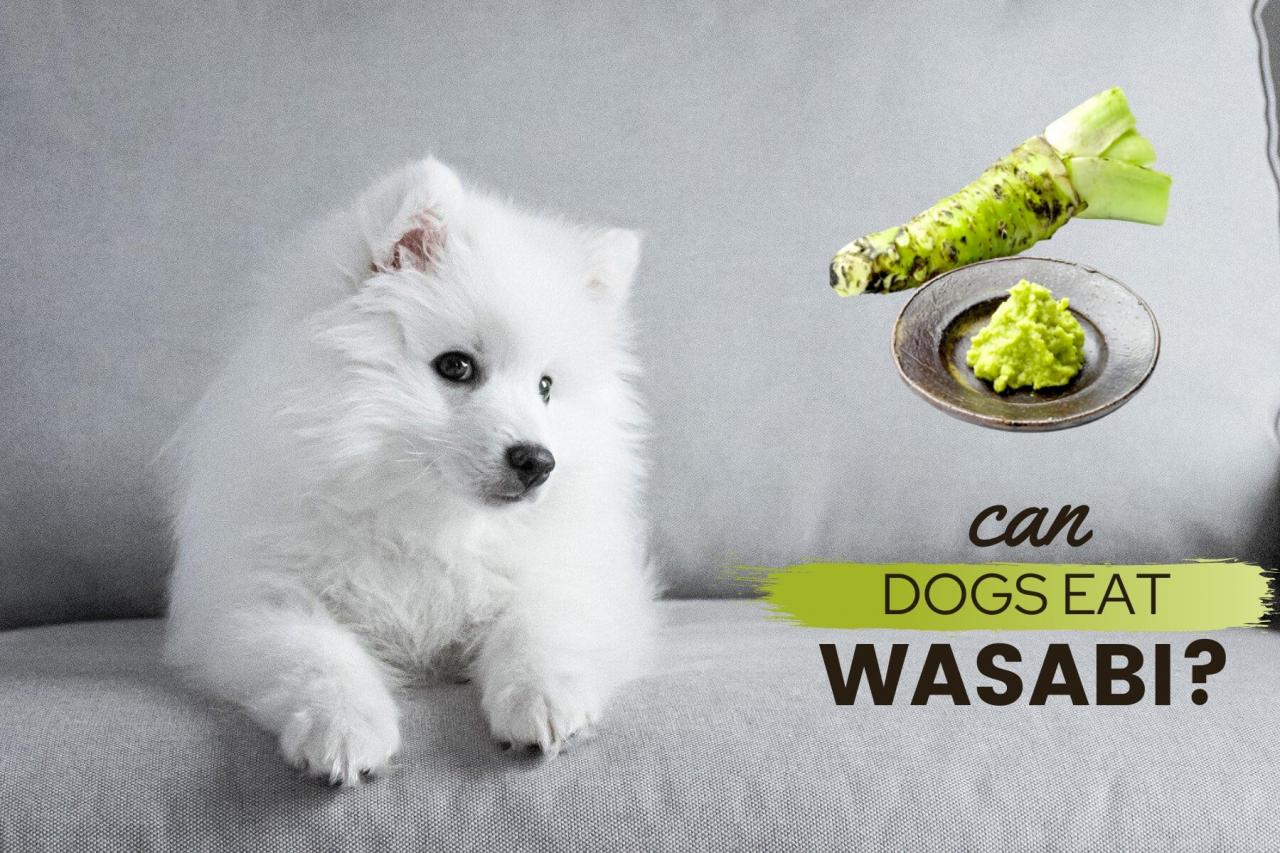 When we hear or read the word wasabi our thoughts immediately drift to a mouthwatering sushi roll. The thing with wasabi is that you only need a little bit to satisfy your taste buds and are often left with a lot left on your plate.

Now if you’re someone who enjoys eating takeout at home you’ll be well aware of how difficult it is to enjoy a meal without your dog staring at your food longingly and more often than not we find ourselves giving in to their puppy dog eyes.

When it comes to this spicy paste, not only is it delicious but it also has a bunch of health benefits. Well, for humans at least. While you’re tempted to slide your plate of leftovers to your dog you wonder if your dog should be given a bit of wasabi. You haven’t heard of dogs eating spicy food and so you’re not sure how your dog will react. And even if your dog gobbles it up, you’re not sure how their system will react to the wasabi.

You’ll also wonder if wasabi is toxic for your fur friend. To put your mind at ease, wasabi isn’t toxic for your dog. However, there are quite a few reasons why you should keep wasabi out of your dog’s diet. Read on to find out what those reasons are.

Is wasabi safe for dogs?

There are numerous videos on the internet where pet owners offer their pets food they have never eaten before to get their reaction for the sake of entertainment. If you’re planning to do that with your dog, to experiment with how they will respond to the foreign taste of wasabi, don’t.

We can tell you this much without you having to experiment: dogs and spice don’t go hand in hand. Think about it. Dogs are omnivores which means they eat both plant and animal stuff to survive. With the exception of spices themselves which dogs stay away from in general, they won’t have access to spices. So when purposely given spices they won’t react well at all.

But sometimes, the introduction of food that your dog isn’t supposed to eat doesn’t happen because you want it to. Any dog owner knows just how much of a sneak a curious dog can be. Turn your back for a second and your dog steals out of your plate. If you’re having sushi then your sneak of a dog is very likely to get a dose of wasabi.

What will happen if your dog does end up eating wasabi? Their reaction to the spicy paste won’t be good, that’s for sure. Your dog will frantically rub their mouth, snout, and face all over your floor to try to get the taste out of their mouth and because the spice from the wasabi made its way into their nose causing a burning sensation. Your dog may also end up sneezing a lot as well. They will lick their lips and will rush to their water bowl once the hit of wasabi registers.  All of this will be an attempt to get rid of the taste and the spice and is indicative of extreme discomfort.

Your dog might run around frantically, or start pacing restlessly. Their ears will droop and their once wagging tail will be found between their legs. All of these are signs of distress from the burning of wasabi which is probably hurting both their mouth and stomach.

It is bad enough when the introduction of wasabi is accidental. Why would you want to purposely expose your dog to such extreme discomfort?

Is Wasabi Toxic to Dogs?

Other than being a great taste enhancer for our sushi, Wasabi has anti-inflammatory, antibacterial, and anti-cancer properties and also helps with asthma and allergies. Wasabi is rich in Vitamin C, calcium, and potassium.  But as far as these benefits are concerned, they are only applicable to humans. There haven’t been enough discoveries to link wasabi benefits to dogs.

But is wasabi toxic for dogs? Wasabi comes from a plant that is from the Brassicaceae family and other members of this plant family include mustard, cabbage, and horseradish. These are foods that dogs can eat (though they should only be given mustard greens, not mustard seeds!). So wasabi like its other plant family members isn’t toxic for dogs.

However, just because it isn’t toxic doesn’t mean it is okay to give to your dog. Exposure to too much wasabi will cause gas, vomiting, diarrhea, and the mouth to feel like they are burning.

If we don’t offer wasabi in its paste form can we offer treats such as wasabi peas to our dog?

Wasabi peas are a very popular crunchy snack that is made of peas that are dehydrated and roasted and coated with wasabi. They also contain sugar, oil, salt, and starch. While peas are healthy food for dogs, the other ingredients mentioned aren’t appropriate for your dog to consume and thus should be avoided.

Wasabi almonds are no different. In fact, they are even more dangerous for your dog since almonds are known to cause gastric issues in dogs. Thus should be avoided altogether.

Being a dog parent is tough. There are foods that you enjoy very much but have to be super careful about when you bring them home because they aren’t appropriate for your dog to eat. You have to be super vigilant in ensuring the food is kept out of your dog’s reach. And even if you manage to do so, you have to be careful when eating the food too since dogs are the ultimate sneaks and can steal off of your plate when you aren’t looking. Wasabi is an example of a food that might not be toxic to your dog but eating it won’t do well either. Wasabi in small quantities won’t do much harm other than causing severe distress. If eaten in large quantities, it won’t kill your dog but will cause some health concerns.