Cats are known to be picky eaters, and when you find a commercially available canned food that your cat likes to eat, it seems all is well in the world. However, if that food or flavor is called back and your cat refuses to eat anything else, you are all but ready to burst into tears.

That is why many cat owners end up deciding to start feeding their cat’s home-prepared food. Now that leaves the most important question about what we should put into the homemade meals.

We all know that cats are true carnivores, which translates that their main diet consists of some animal protein. Animal products are an absolute must. Vegetables and carbs are not a part of a cat’s natural diet though they can tolerate small amounts. Out in the wild, cats hunt their prey and eat their carcasses, consisting of bones, meat, and organs. They also eat a minimal amount of vegetable matter that is present in the animal’s gut.

Cats need high moisture and a high protein diet to lead a healthy life, and all this can be found in raw meat. Moreover, other necessary elements needed by a cat present in raw meat include fatty acids, minerals, vitamins, and taurine.

But just because wild cats eat raw meat, that doesn’t necessarily mean domesticated cats do too. If they don’t eat raw meat, then what should be included in their homemade meals?

To get one essential thing out in the clear, cats, even domesticated ones, eat raw meat! Most cat owners opt to prepare raw diets that resemble what cats eat in the wild. However, there is a great debate about whether giving your cat a raw meat diet is advisable or not.

What raw meat can I feed my cat?

Since raw meat has been established to be a safe part of your cat’s diet, the question is, what kind of raw meat can be given? A raw food diet is also known as a BARF diet, which translates into “bones and raw food” or “biologically appropriate raw food.”

Human grade raw meat such as raw chicken and lamb is safe to be fed to your cat. Even raw meaty bones are a safe bet, although we would advise asking your vet before you give your cat bones, and they’ll tell you if your cat has oddities such as dental issues, a deformed jaw, or are simply a bit too old for bones.

Raw meaty bones have quite a few health benefits attached to them, such as keeping your cat’s gums and teeth healthy. The bones suitable for your cat’s consumption include raw chicken’s neck, drumsticks and wings, and raw lamb shanks. Always remember to feed uncooked bones. The reason behind this is that cooked bones tend to splinter, which can end up causing internal blockage or damage that can be fatal.

It would be best if you always made sure the raw meat that you include in your cat’s diet is fresh.

It is also recommended that you only give your cat human-grade raw meat and bones and avoid raw meat products which are labeled as pet food such as pet mince, pet meat, and pet bone products, for the simple reason that they contain preservatives that keep them fresh but can prove to be unsafe for your cat’s health. There have been cases of thiamine or Vitamin B1 deficiencies caused by the sulfite present in the preservatives. This deficiency can prove to be fatal in cats. Other foods that include the sulfite preservative include sausage meat and other manufactured meats.

Why opt for a BARF diet? 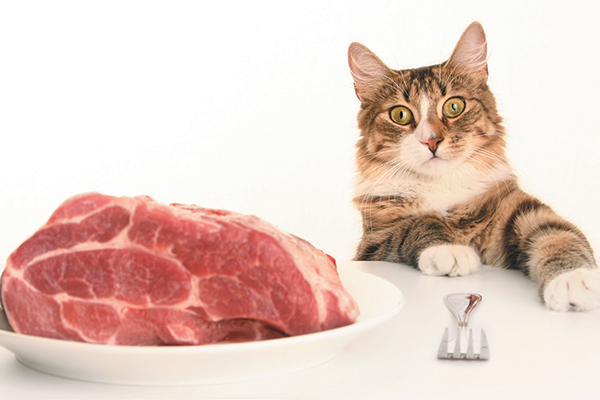 As we mentioned before, there is a huge debate revolving around whether a BARF diet should be followed or not.

Now the supporters of this diet argue that cooked meat messes up the vital substances cats need from meat. The BARF diet is the closest replica of a cat’s natural diet. Wild cats are known to hunt fish, birds, insects, other small mammals, and even reptiles. Feeding raw meat will create a diet similar in terms of nutrition.

But is the BARF diet safe?

Following the diet does come with its fair shares of problems and those against the BARF diet argue that the risks are more significant than the benefits.

So, what are these risks? Firstly, raw food contains pathogens such as E.coli and Salmonella, causing fatal infections in cats. Cooking the foods removes the pathogens, which are why we cook our food. Now a huge pathogen-related issue is cross-contamination with humans and possible contamination. Pathogens can be left beyond the surfaces where the food is prepared, in the food bowels, in the cat’s stool, and can also come from your cat itself. 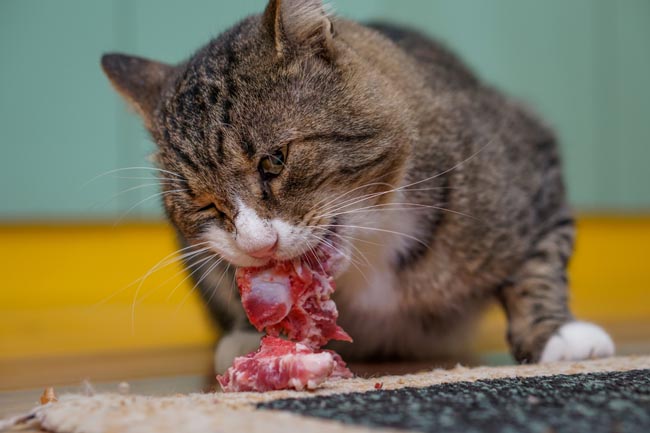 Thus this diet isn’t appropriate if you have young children at home or older people. It also should be avoided if you have immune-compromised people in your homes.

Another issue with the BARF diet is that the owners assume that meat and bones are all that their cats need and ignore other essential parts of their diets, such as the nutrient, fat, and calorie contents. As a result, you can end up giving your cat an incomplete diet. Commercially available pet food has done a lot of research to prepare the food they sell and thus provide complete nutrition.

Moreover, while one might want to give their felines the most natural diet they can mimic, they should also remember that wild cats and feral cats lead a much shorter lifespan than domesticated cats. A contributing reason is a different lifestyle and diet.

While there is no right or wrong answer to this debate, make sure to do proper research before coming to a decision.