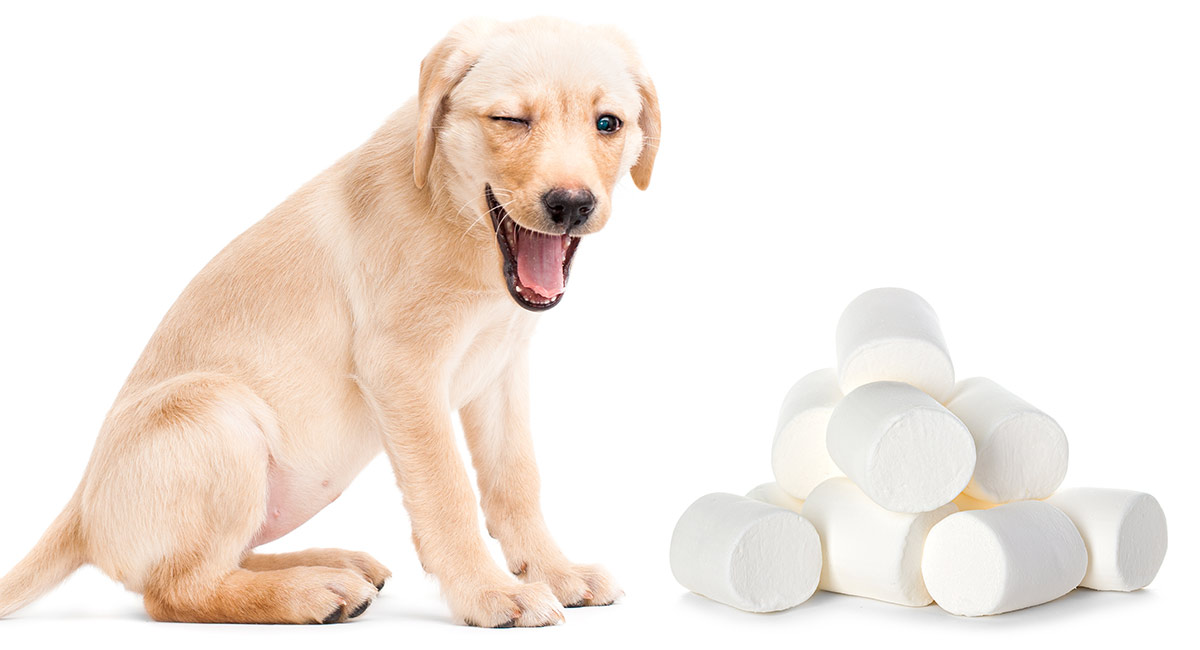 Marshmallows are made from the extract of the mallow plant, and it was initially made in Egypt. The combination of the mallow plant’s extracted sap with nuts and honey appears in the form of a delicious sweet called marshmallow. Confectioners also add sugar and egg whites to give it a totally new twist.

Your pooch craves to taste everything available in your kitchen, including sweets and other sugary things. And if they see a massive pack of marshmallows, they start anticipating you drop something delicious to munch.

Marshmallows are tasty, but they definitely can cause trouble to your pet dog’s digestive system. Marshmallow can be given to your pup in a minimal amount as a rare treat, and if a marshmallow has Xylitol as an ingredient of it, never allow your pooch to eat it.

Though all of the marshmallow types are not toxic for your pup, they indeed have no great ingredients in them for your canine friend. Every brand has its own unique formula for its perfect marshmallow. Still, their ingredients are not so appealing to the nutritional benefits of your dog.

What is a marshmallow?

The commercial marshmallow we typically get nowadays is made by incorporating air into a mixture of sugar as well as water such as corn syrup and sucrose by whipping them together. Also, they comprise artificial flavoring and in certain recipes, artificial coloring, sweeteners, and preservatives. In ancient times marshmallow plants were used medicinally, and the mallow sap was used for humans and dogs due to its healing properties. Marshmallow plant was used for the treatment of irritation of mouth and throat, bronchitis, tuberculosis, and dry cough. Its emollient and anti-inflammatory features make it a useful treatment for various skin conditions, including boils, rashes, and eczema. Still, it is used as a homeopathic and natural route to treat severe illnesses.

Why is marshmallow not healthy for dogs? 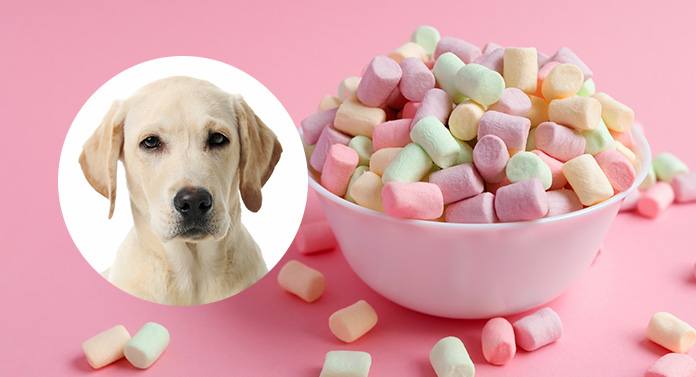 Marshmallow is generally safe for dogs to eat, but it doesn’t mean you can give it to your dog without any concerns. Very little to no nutritional value in marshmallows for your dog makes it a useless treat for your pet. There are far better occasional treat options available for your pooch that they will enjoy and even benefit from.

Marshmallow contains an incredibly high amount of calories and sugar that are extremely dangerous for a dog with weight problems and diabetes issues. Even if your four-legged furry friend is healthy, feeding him with sugary treats may result in obesity and can also lead to insulin resistance or diabetes.

Sugar consumption is terrible for your dog’s oral health, and it can also lead to high sugar levels to cause different health issues.

Marshmallow is a high sugar food and can only increase the risk of obesity and then diabetes.

Health benefits of marshmallows for dogs:

You cannot call marshmallows not all bad for your dog, it actually has some health benefits for your pooch. It contains little copper, iron, and selenium also. 2% of protein is also present in it, while the rest is carbohydrate and fat. The minerals present in marshmallows are beneficial for:

Types of marshmallow safe for dogs: 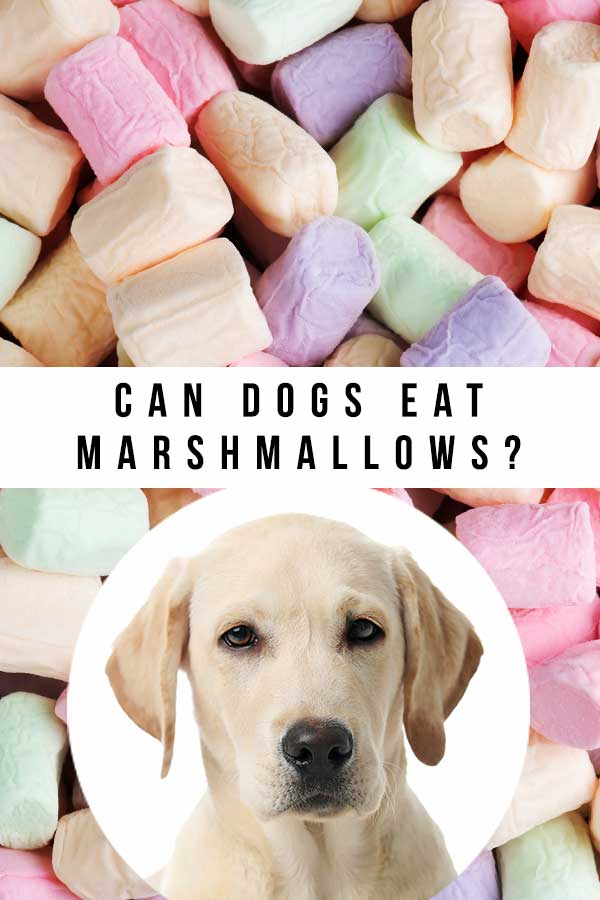 All types of marshmallows are safe to feed your pet dogs if fed in low amounts. Only the marshmallows containing Xylitol are not safe for your pup. Xylitol is an ingredient that is present in sugar-free marshmallows. It is extremely dangerous and toxic for dogs; even its smallest amount can cause hypoglycemia (low blood sugar), liver failure, seizures, or even death in dogs.

The level of blood sugar is controlled by insulin in humans and dogs. Xylitol does not stimulate the release of insulin from the pancreas in humans. Still, in dogs, Xylitol quickly absorbed into the bloodstream and promoted insulin’s potent release in dogs. It generates a hypoglycemic impact within 10 to 60 minutes after eating Xylitol that can be life-threatening if it remains untreated.

NOTE: Never give your dog a sweet or candy that is labeled sugar-free because it contains Xylitol. It is best to avoid feeding your dog with sugary sweets and substitute them with healthy fruits in moderation.

Raw marshmallow for dogs and medication:

Dogs should not eat marshmallows as it poses health threats. If you wish to treat your dog to some marshmallows, make sure not to be over-generous. According to some pet owners hiding your pooch’s medication inside a marshmallow and giving it to them makes it easier for dogs to consume the medication without resisting much.

In reality, it is not the right way. Since the marshmallows are full of sugar and processed, it is not suitable for your dog. You cannot call it toxic unless it has Xylitol in it, but this is not an impressive way to entice your dog to take medicine. Instead of marshmallows, you have a healthier and natural option to wrap up your dog’s medication; like peanut butter. Peanut butter is completely natural and is also available in sugar-free varieties.

Homemade or commercial marshmallow for dogs: 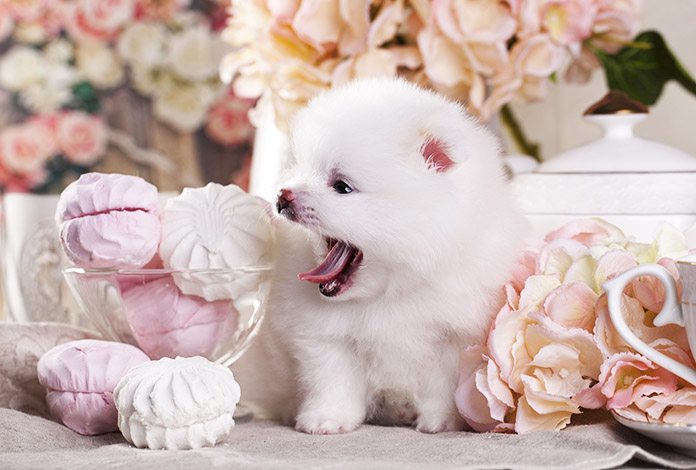 You may say that there are two kinds of marshmallows: homemade and commercial marshmallows.

What if your dog eats marshmallows?

A marshmallow that does not contain any Xylitol, poses no safety threats to your dog. If your dog eats a few marshmallows (with no Xylitol), there is no need to panic.

But suppose your dog has managed to get an entire bag of marshmallows and devour a lot of it. In that case, you have to prepare yourself for an adverse reaction to his overindulgence. Fortunately, there are no life-threatening outcomes, but some gastrointestinal upsets like general discomfort, diarrhea, and vomiting can be expected.

If your dog has consumed a marshmallow with Xylitol, keep an eye on your dog for the above mentioned and following symptoms: 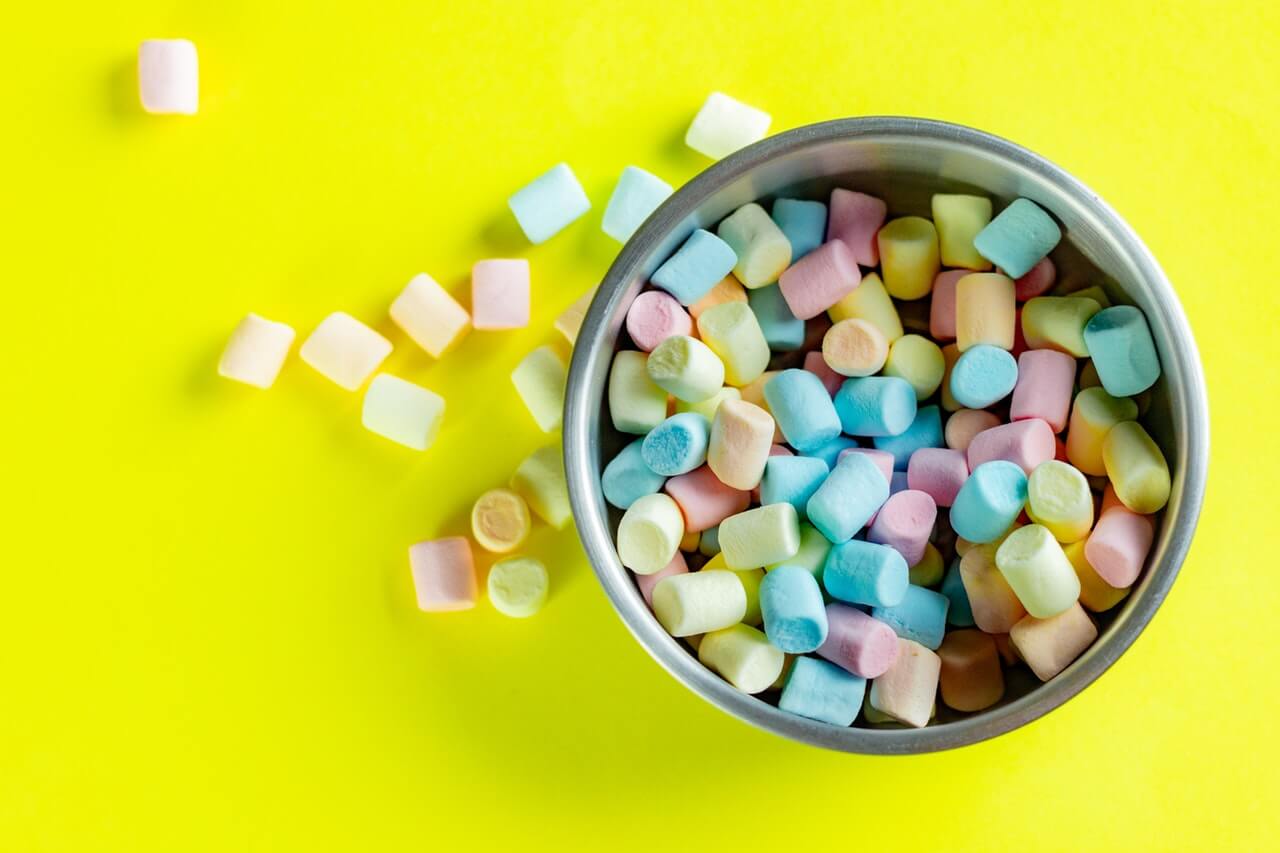 The following are the treatments for Xylitol poisoning:

How many marshmallows are enough for dogs? 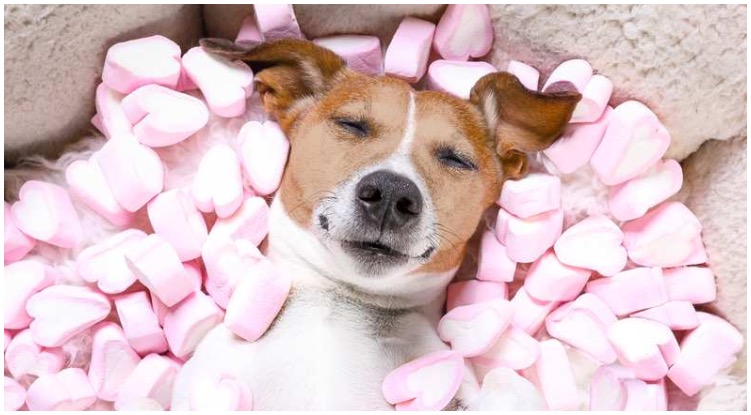 Avoid giving your dog marshmallows often to lead to obesity, poor dental health, and diabetes for dogs. Try to give only one to two small-sized marshmallows to your dog for a strictly occasional treat. More giant-sized marshmallows are not suitable for pet dogs as they can also cause choking hazards, especially in small breed dogs.

Can dogs have marshmallows?

Your dogs can definitely eat marshmallows once in a while, and they are safe and non-toxic for your pooch. These marshmallows contain lots of sugar and give it in moderation to your canine friend. Otherwise, heart diseases, obesity, pancreatitis, and diabetes are the issues your dog may face.

Pet snacks always follow the 10% rule, as these are unbalanced foods or treats. According to this rule, the daily caloric intake makes up 10% of your pet’s diet. For your guidance, it is mentioned that:

Always store marshmallow packs away from your pet’s reach because overeating marshmallows can make your pup ill. To stop lethal accidents, it is best to offer your pooch something more nutritious and non-toxic. Rare consumption of marshmallows is ok for your pet and causes no harm. Still, these are not good treats for your pet dog even on special occasions because of zero nutrients. Also, strictly avoid making a habit of it. No need to get tense if your dog eats some marshmallows (Xylitol free), but be sure your furry devoted friend won’t have it again. Rare consumption of marshmallows is not harmful to your pet!