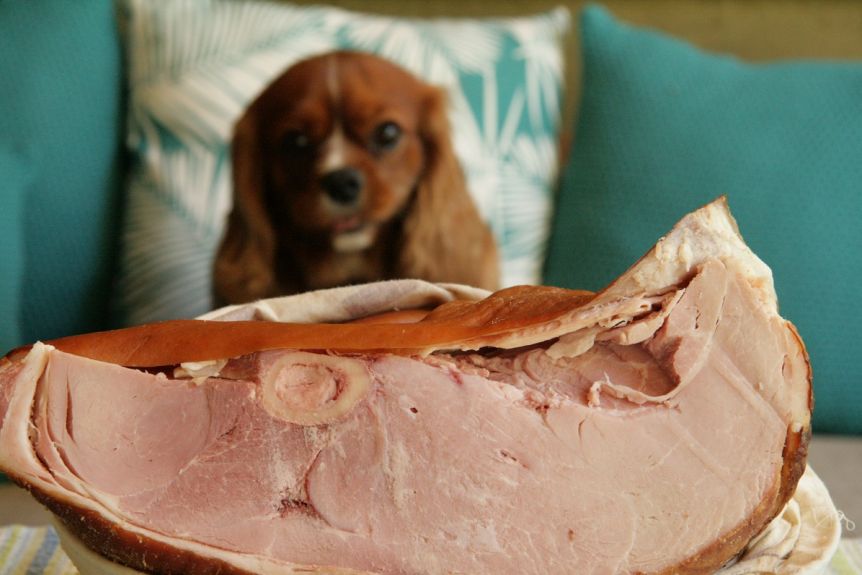 As you cut a slice of the round ham for your favorite sandwich, your dog might be salivating beside you. Looking at their innocent face, you cannot resist giving them a piece. But, the question is, can dogs eat ham?

Of course, they can! Dogs will eat whatever you give them; being a pet owner, it is your responsibility to feed them the right food.

So, is it safe for dogs to consume ham? This question can be a bit tricky and has a very detailed answer. So, let’s dig deeper into the details and find out!

The answer is both yes and no. Ham is rich in protein, and dogs require a protein-rich diet. But, there are several other substitutes for proteins.

Ham is not toxic to dogs, but it also does not have much nutritional value, and it is also not a healthy option for your furry friend.

Harmful Ingredients For Dogs In Ham

Ham has a high amount of sodium in it, and it is harmful to dogs because they cannot digest it. Your canine companion has a different digestive system than you.

Therefore, the sodium levels which are okay for you might be life-threatening to them.

If your pup overeats ham, it can cause diarrhea, vomiting, and seizures.

Store-bought ham also has additives and preservatives that are added to increase the shelf life. Nitrates and nitrites are added to it, which is sodium- based. In rare cases, it can also cause nitrate poisoning if ingested in large amounts.

Processed meat, like ham, also contains MSG, which is used to enhance the flavor. This ingredient is nutritionally unnecessary for dogs as it can have adverse effects on health in the long run.

There is no doubt that ham is full of fats than any other meat. This fat is not healthy and can cause obesity. And, if your dog has gained weight, it will become lethargic and will not actively respond.

Just like a high-fat diet isn’t good for humans, the same goes for animals. But that doesn’t mean your dog doesn’t eat meat fat at all. They do but in moderate quantities.

Only 15-20% of fat in animal food is right for your dog. If you’re wondering what makes ham so delicious, it is the fat! 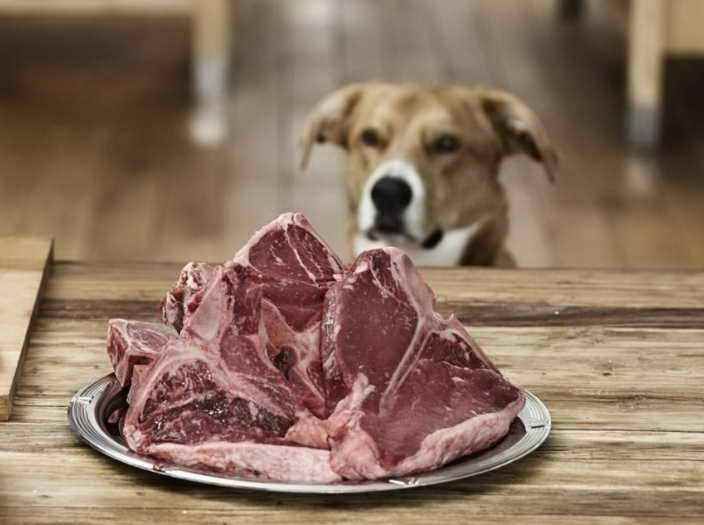 According to research, the fat found in pork, especially ham is unhealthiest and hard for dogs to digest as well.

Now, be careful while giving it to your pet as you do not want to harm them.

What About Ham Bones?

It is a complete “NO”. It would be best if you didn’t give cooked ham bones to your dog. This is the worst thing you can ever do for your pet.

Have you noticed why the number of visits to the vet increases around holidays? It is because your pet engulfs the tasty food on your table that causes an upset stomach or bone ingestion.

Cooked bones become soft and can break down into pieces after your dog chews them. The sharp edges of the bones can damage the mouth and can even cause rupture of the internal organs, which will lead to bleeding.

If we talk about raw ham bones, it has harmful bacteria over it which will also affect the health of your dog.

Cons Of Feeding Ham To Dogs

Your furry friend will face a lot of health issues due to overconsumption. The following can be some symptoms that can tell you if your dog has eaten more than it should.

It is also known as inflammation of the pancreas. This is a widespread health problem that your dog might suffer from.

The reason for this inflammation is the overconsumption of salt and fats. It causes the digestive enzymes to produce in excess and digest the food even before it reaches the intestine.

In easy words, the pancreatic juice causes it to digest its pancreas. It can lead to damage to other organs too.

If not taken seriously, this might kill your pup as well!

If you see the following symptoms after your pooch has engulfed ham, take it to the vet ASAP! 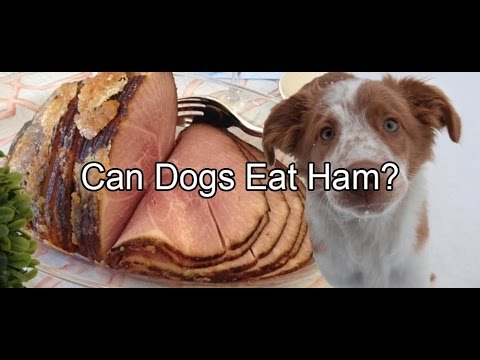 Your pup won’t find a plain ham bone tempting. For them, the thick meaty hind bone is what they drool for, and it will most likely keep them out of the kitchen.

But, as stated earlier, ham bones are not suitable for your dog, either cooked or raw. It can cause perforation and internal bleeding.

Not only bones but if your dog has accidentally eaten a massive piece, it can also create problems.

If you have caught your pup eating the bone and worried about the internal bleeding and perforation, and looking for symptoms, check the list below:

It is a kind of parasite which is found in meat but is common in pork. It is also known as pork roundworm.

Trichinellosis or trichiniasis is a nematode known as Trichinella spiralis. These roundworms are typically found in raw, undercooked, and contaminated meat.

This worm is not only harmful to dogs but humans too. This parasite can transfer from your stomach to your muscles and causes severe cramps, stiffness, inflammation, or even death.

These roundworms do not get out of the dog’s body very quickly, and its treatment is also costly. If you see that your dog is feeling uneasy take him to the vet. 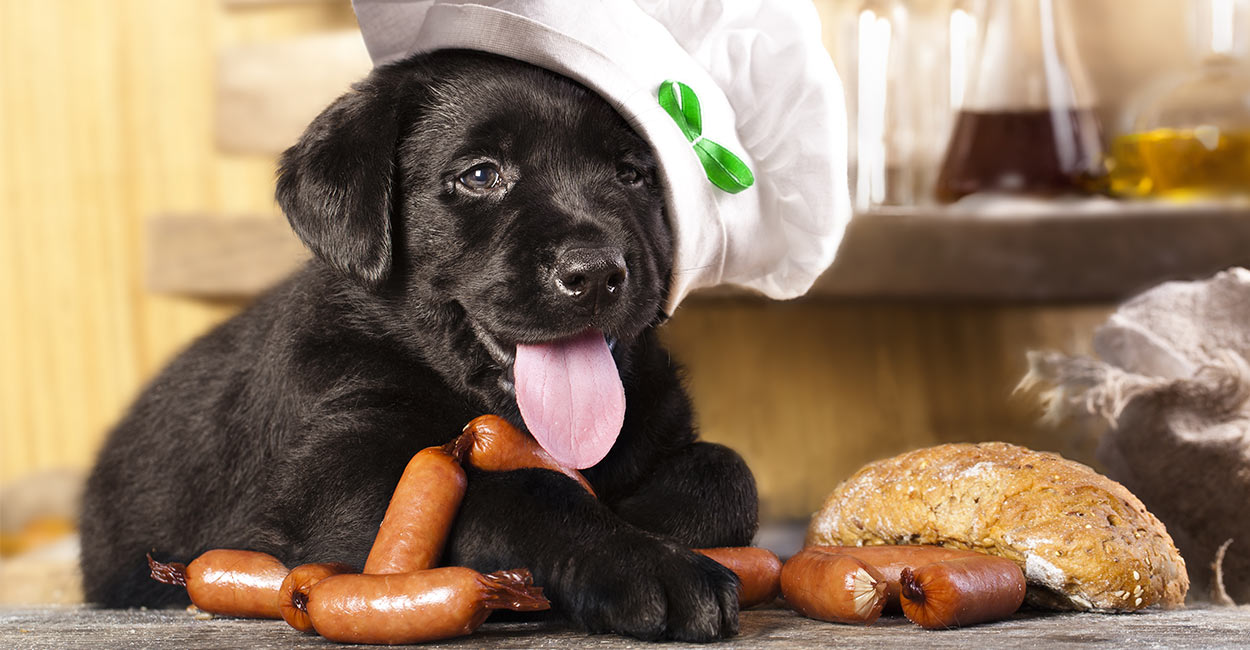 At the end of this topic, you may have found the answer to whether a dog can eat ham or not. Like every other human food, the ham should also be given in moderate to minimum quantity.

This is because it has a high amount of fat and sodium, which are not healthy ingredients for your dog. Hambones should be avoided too, as it carries the risk of choking and internal injuries.

Therefore, you should keep a check on what your fluffy friend is munching on, as you don’t want to risk its life.