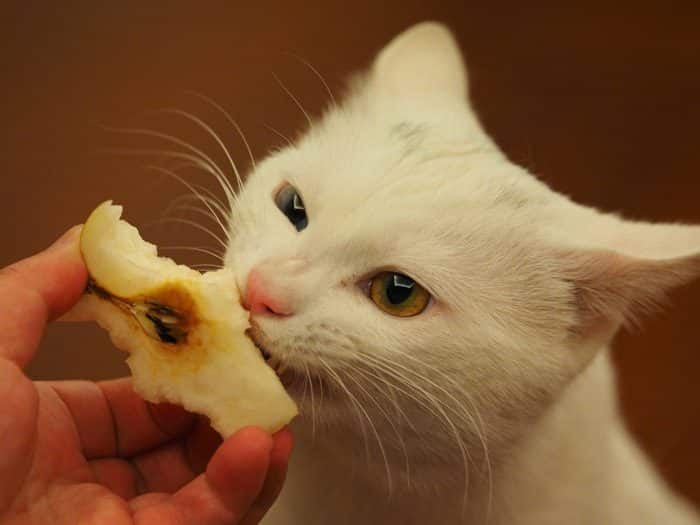 Apples are usually considered very healthy for people and usually are recommended daily.

Can cats eat apples though? You might be tempted into giving a bite or two to your cat while you’re having one for a snack. Even cats, not to mention the younger kittens who are higher on the frolicking side, could be tempted to try a bit or two of apples. Apples are indeed quite healthy, but that does not mean it is fit for your cat or that all parts of it are fit for your cat. You have to consider the fact that cats are not part of the human species. It is true that they live with us and may have common lifestyles to ours, but they still aren’t people. 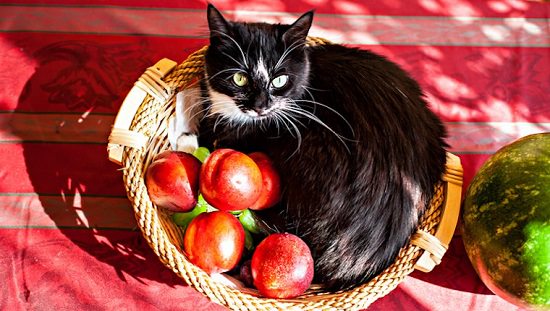 This means that they eat meat regularly. It is not like they don’t eat vegetables or that they won’t. It is more like their bodies are built and designed to obtain more nutrition out of meat meals. That is how their bodies and their whole physique works. Cats will have a hard time digesting foods like fruits or vegetables. It is not about their psychology or their personal preferences. It is about their basic body structure and the way they have evolved across the decades. This does not mean, however, that cats don’t have fruits or vegetables or that they won’t eat such foods, or that it is dangerous. It just means that apples and cats don’t go well together.

Beyond the basic fact that cat bodies are not designed for apple processing, it would also be highly beneficial to look at the core reason why apples could be dangerous to your cat. Most parts of an apple would do fine in a cat’s belly. A cat’s stomach can take the apple in without any issues. But the seeds of an apple could be fatal. It could be deadly depending on the dose. This is because apple seeds contain cyanide content. This is part of the defense mechanisms of plants that fall in the rose family. Apples, peaches, cherries, and all those fruits fall into this rose family and tend to have cyanide contents in their body. So, this means that the apples are partly toxic to felines. Cyanide, being a really deadly poison, could easily poison your cat. Apple seeds crushed in a good quantity could even bring down a fully-grown human being. So, you might not need an explanation of how deadly the apple seeds are for a much smaller-shaped cat body. An apple seed does indeed contain only a small amount of poison, but it is truly deadly, so it is always better to be on the safe side.

The meat of apple is safe 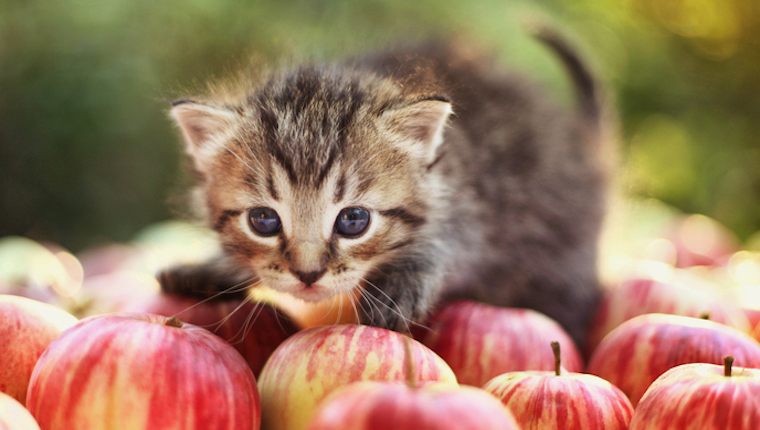 That being said, it still is true that the meat part of an apple by itself is safe for any cat. Large pieces of apples could choke your cat specifically if your cat is only in the kitten stage or if your cat is not intelligent enough, which cats, especially homegrown cats, tend to be. So, the core and seeds definitely need to be removed and the apple needs to be cut up into smaller edible bites. Even after all that work, your poison-free apple remains an option that is not all that perfect for a comfortable cat’s diet. So even still, you would still have to be on the lookout for signs of bad digestion from your cat.

But is an apple still good in a cat’s diet? Yes, it is. Like mentioned before, apples in small doses won’t hurt your cat. Your cat would only have an improved immune system, to be honest, so this is good news. Still don’t try to supplement your cat’s meat quantity with apple. Cats need meat. That should always be the primary source of nutrition for carnivores. Apart from immunity, cats could also age slower with apples in their diet. Of course, apples are known for their anti-aging and immunity powers. Research still goes forward about how useful human foods are to cats and other household pets.

What about cooked apples? 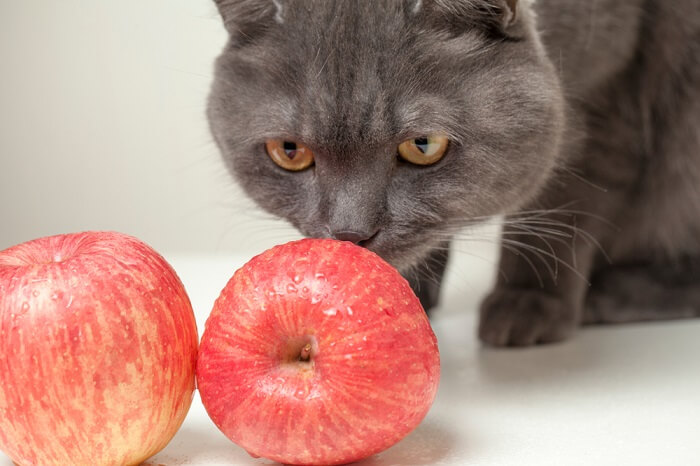 The answer remains a simple yes. For a cat or a cat’s belly, a cooked apple is much the same as an uncooked apple. Here again, you might feel like adding some cinnamon or sugar to your cooked apples, but again, the cat is not a human being. A cat stomach may not welcome too much sugar and other such spices.

What if cats eat the seeds?

As mentioned before, the seeds of the apple and the core as well could contain some significant traces of cyanide. When consumed in enough numbers, this could be deadly. Heart palpitations and repeated breathing are some of the best signs of such traces of poisonous substances in any animal, including cats. One of the best things to do is take your cat to the vet right away. If any of the above-mentioned symptoms are observed, you could be sure that there are toxic substances in your cat’s system.

So about the one critical question we’ve been dealing with all through this text.

Well. Yes and No.

Primarily there is especially no need for you to consider feeding apples to cats. Even if your cats feel like taking a bite out of an apple or have the habit of playing with things that involve apples, the question will still hold. While it’s only worth knowing that apples don’t really pose a great risk to cats, it does depend on what part of the apple your cat has had. The apple is fine. But its seeds and the core parts of apples are not. Especially considering how small and little a cat can be, the tiny traces that may not affect your child could affect your cat. The seeds and core are best split apart from the apple if you are going to let that apple anywhere near your cat.