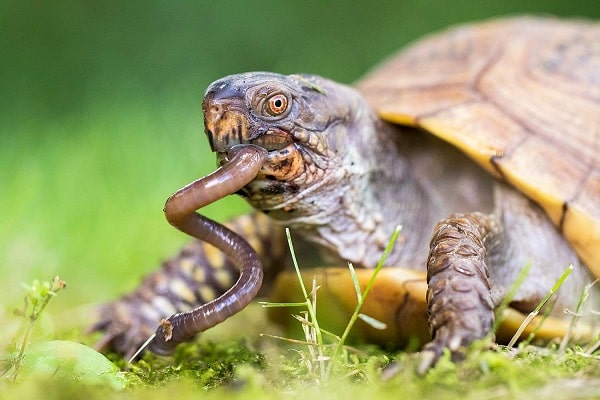 Turtle diet isn’t talked about enough. We are sure that all the turtle parents agree with us! We mean to say turtles are as cute as a cat or a dog. Hell, they don’t even create a disturbance like other monster pets! And yet, all we see on the internet is, can dogs eat this or can my cat have that?” You will not find a decent answer to even a basic question like, can turtles eat earthworms? Because we realized the gravity of the situation much better and quicker than anyone else, we decided to dedicate an entire discussion to this very question. We methodically approach the question that we stated earlier and see if your turtle can eat earthworms or not.

The normal diet of a turtle

But before we start digging for earthworms, let us see what turtles normally eat. While there are many turtle subspecies, it is fairly easy to sketch a turtle’s general diet framework. Please note that we are talking about the domesticated turtles here; the wild ones eat stuff that will make you push away your dinner plate. Ok, so turtles love to eat insects for their protein intake. There are a few fruits and vegetables that your turtle can have as well. But the routine practice is to feed your turtle commercially available food pellets that have all the basic nutrients required for your turtle’s growth.

Without beating about the bush, let us answer the question around which this debate will revolve. Can turtles eat earthworms? YES. Turtles can eat earthworms. But we are afraid that is the short answer and doesn’t offer any in-depth takes on the subject matter. There are certain considerations that you must be mindful of (we talk about these in the next section) and a few risks that you need to be aware of (we talk about these a bit later). And for all these details, you will have to stick with us a bit longer! 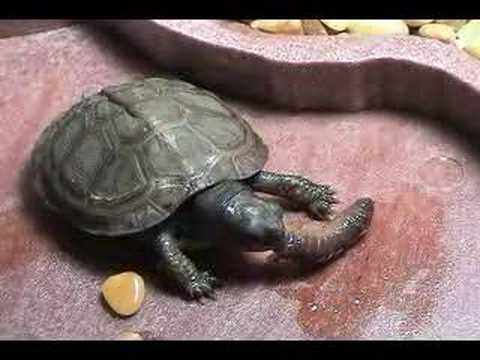 Well, we have given the green light to your turtle as far as the earthworms are considered, but as we said, you must be mindful of a few important points. Firstly, if you are feeding your turtle earthworms, make sure that these worms are coming from the earth, not some chemical fertilizer depo. We say this because the worms coming from a heap of chemical fertilizer might be treated with the chemical itself. Hence, snacking on something like that is hardly suitable for your turtle. Then, serving worms in a fashion that doesn’t define the word overkill also matters. We are sure that your turtle will go for pretty much anything like grubs, grubs, snails, and earthworms. Hence, moderation is the approach to adopt! We think you should introduce earthworms as a treat in your turtle’s diet!

Well, the biggest threat that comes with the earthworms for your turtle is the parasites that the worm might be carrying. We all know that snails and earthworms can be secondary or primary carriers of infectious parasites. Hence, if you are feeding a turtle on infected earthworms, it is likely to fall ill. The best way to avoid this complication in the first place is to make sure that the soil from where you are digging your worms is as natural and clean as it gets. Also, you need to make sure that all the aspects of your turtle’s diet are being fulfilled. Just feeding on worms is not ideal! 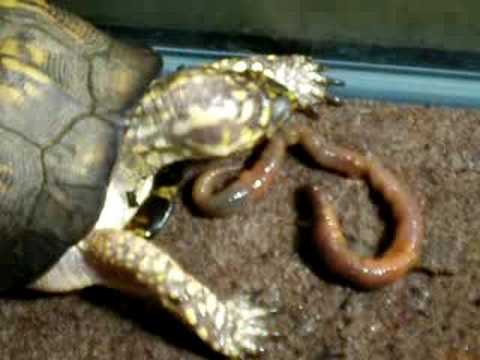 Box turtles are omnivores by nature; they are pretty happy to eat stuff like flowers, mushrooms, snails, and certain insects. Hence, we cannot imagine why earthworms should be off the limits for box turtles. Oh, but wait, let us talk a bit about box turtles as well.  There are many species of turtles, but none as popular and domesticated as the box turtles. Box turtles are a special species found in northern America. These are perhaps, the cleverest turtles in the world since they can pretty much understand what their pet parents are telling them to do! Hence, their profile value is also higher as compared to other turtle species. You can understand why

Does your turtle need a deworming agent? 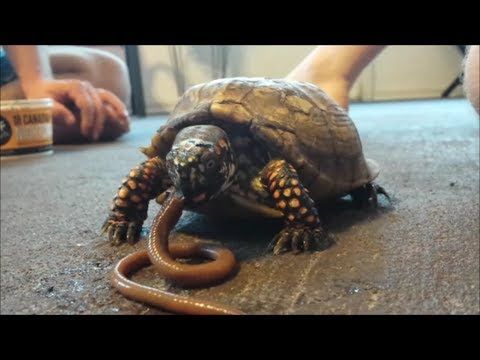 As we said earlier, the earthworms you feed your turtle might be carriers of parasites or worm larva. In such a scenario, your turtle can become a victim of worm infestation. This is something that is diagnosed by symptoms such as lethargy and tiredness, and of course, an inspection of fecal matter. Once you are certain that your turtle has worms, what is the next step that you need to take? Getting a deworming agent! Two important considerations in this regard. One, the product should have a reputable brand’s label. Second, you must consult the vet before you go shopping for a deworming agent.

What to do in case your turtle starts gagging?

The chances of this happening are ridiculously low, but we have to discuss all the possibilities. So, what if your turtle doesn’t like the worms? What if eating them induces lethargy in the pet? What is the first thing that you need to do after snatching the worm bowl from your turtle’s reach? Get the vet. Please don’t play the vet, as some people foolishly do so. Vets are professionals who understand your pet’s issues much better than you. We are not in favor of buying a deworming agent on your own even!

Well, folks, that would be all for now. Figuring out a diet plan for your shell-wrapped friend can be a bit of hard work since there isn’t enough content available to research on the web. However, try¸ as you should. If you ever feel you are stuck on something hopelessly, feel free to visit this place again. We have solved the earthworm conundrum for you in a jiffy; no other problem can be bigger than that!