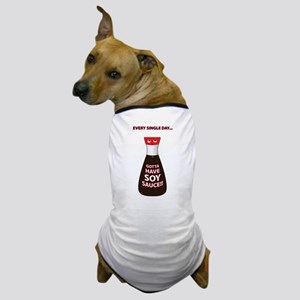 Our love for dogs compels us to share everything that we eat with our four-legged friends. But, there are certain foods that humans can digest well, but dogs cannot. The digestive system of dogs is generally weak, and some foods must be totally avoided to keep our dogs safe.

Most of us know that dogs generally like the taste of soy sauce. Try giving a bit of your Chinese food, and they would gobble it down in a second! But is soy sauce safe for your dog? The straight answer here is, NO!! Soy sauce should be kept far away from your dogs. Just because they like the taste does not mean it’s safe for them.

Let us look into what is soy sauce, and how can it harm your dogs.

What is Soy Sauce?

Soy sauce is a popular Chinese condiment found in almost all Chinese foods. It is made from a mixture of boiled soybeans, brine, roasted grain, and a fermenting agent (yeast). Soy sauce is considered to be highly beneficial for humans because it is high in protein, isoflavones, and antioxidants. It is also known as a beneficial element for a healthy digestive tract in humans. 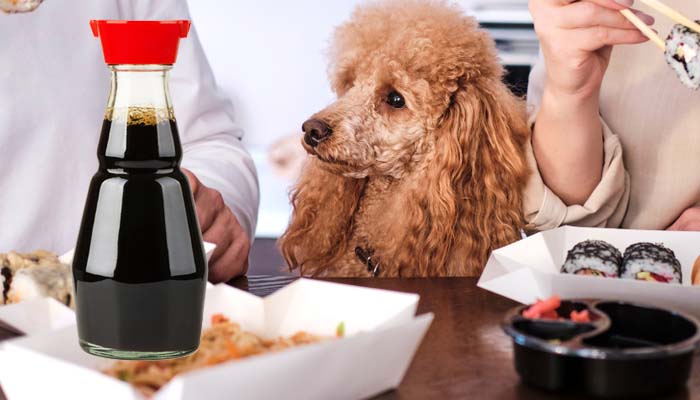 However, one should know that soy sauce is very high in its sodium content. Research studies have shown that just a tablespoon of soy sauce can contain approximately 1000 milligrams of salt. This amount is very high and can sometimes be detrimental to human health if consumed carelessly. The daily recommended dose of salt for humans per day is only 500milligrams. Now, imagine how harmful can this salty food item be for our dogs!

How is it harmful to dogs?

Unlike humans, dogs are very sensitive to high-sodium content. Even slightly salty food can have adverse effects on our dog’s health. Studies have shown that salt becomes toxic for dogs when its quantity equals or is more than 4g/kg of the dog’s weight. However, even with lower doses of salt, there are certain side effects. Just one teaspoon of soy sauce can contain approximately 2.8 g of sodium.

According to the Board of Agriculture and Natural Resources, even consuming more than 100mg per day is dangerous for a medium-sized dog weighing around 33 pounds. And, if your pooch is small-sized, then even a slurp can be harmful!! Soy sauce is not toxic to dogs as such, but it is the high salt content that is dangerous.

Another fact regarding soy sauce is that it contains plant estrogens, which can be harmful in some dogs. Consuming excess soy sauce can increase the level of estrogen, which can trigger estrogen-like activity, especially in neutered or spayed dogs.

Effects of soy sauce on dogs 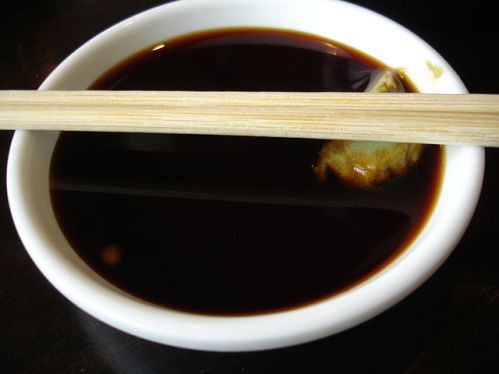 Some of the harmful effects that soy sauce can have on dogs are:

The exact amount of salt that can cause salt poisoning in dogs can differ depending on various conditions, such as the dog’s weight, age, breed, any underlying health issues, and others. However, as mentioned above, even a small amount can have serious consequences.

Salt poisoning can even cause several neurological problems in dogs that can sometimes lead to death even.

Salt poisoning in dogs can eventually lead to kidney failure too. 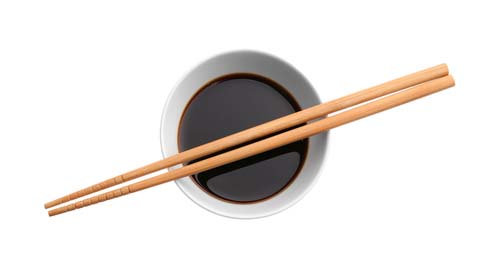 If you notice your dog showing any of these symptoms, you should immediately rush to the vet.

Toxicity and eventually, death is also one of the dangerous effects of excessive soy sauce intake. The reason being, some kinds of soy sauce come with onions and garlic in it. Both of these items are extremely harmful to dogs when consumed in large amounts. Toxicity from these items can cause health issues such as anemia, organ failure, heart damage, or even death in some cases.

Symptoms of onion and garlic toxicity include-

These symptoms can take a couple of hours or even days to show up. You should always be on the lookout for these signs if you think your furry friend has consumed these items by mistake.

Sensitivity to such vegetables can depend on the dog’s breed and other health factors. It has been observed that Japanese breeds are more sensitive to garlic and onions as compared to others. Overall, it is best to keep foods such as garlic and onions or other foods items that can include such ingredients, such as soy sauce, far away from your pooch. 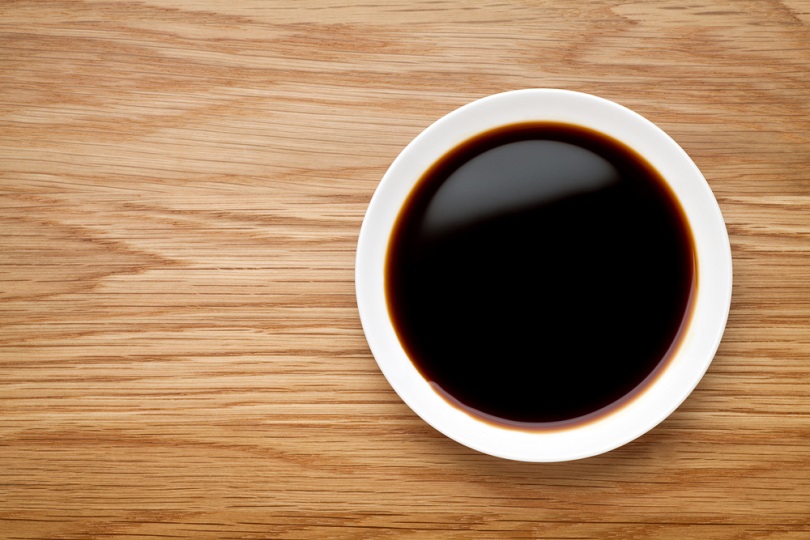 Likewise, excessive intake of soy sauce can also cause hypothyroidism, by interfering in the ability of thyroid glands to secrete the hormone.

What if my dog consumed soy sauce?

If your pooch consumed soy sauce by mistake, it is best to first watch out for the symptoms mentioned above. If your dog shows any of it, the immediate thing to do is to give water to your dog. Doing so will let your dog pee excessively and flush out the salt from the body.

In case your dog exhibits more serious symptoms, then take him to the vet immediately.

Soy sauce should never be made a part of your dog’s diet because they cause more harm than good to your dog’s body. As a matter of fact, it is best to avoid any form of seasonings in your dog’s meals. Many seasonings can cause unseen harm to your dog.

Other human foods are beneficial to dogs, and it is advised to do a little research before introducing any new food items in your dog’s diet.