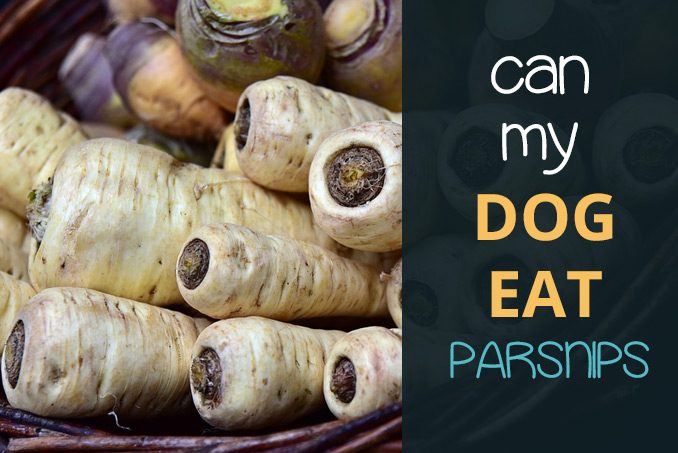 People are so conscious about the dietary plans of their pets these days that it sounds quite far-fetched. Food has never been given more importance in pet care than it is being given now. Our canine friends seem to enjoy the biggest share of all this thoughtful fussing. In fact, they have never emphasized more on dog food for the thought. As the companionship has grown stronger, humans have no problems in sharing whatever they are eating, with their best friends. However, it is hardly a laudable approach. Some things are simply not adaptable to your dog’s digestive system. As you might have guessed from the title, this discussion focuses on parsnips. Can dogs eat parsnips? The query that will be addressed in this discussion! 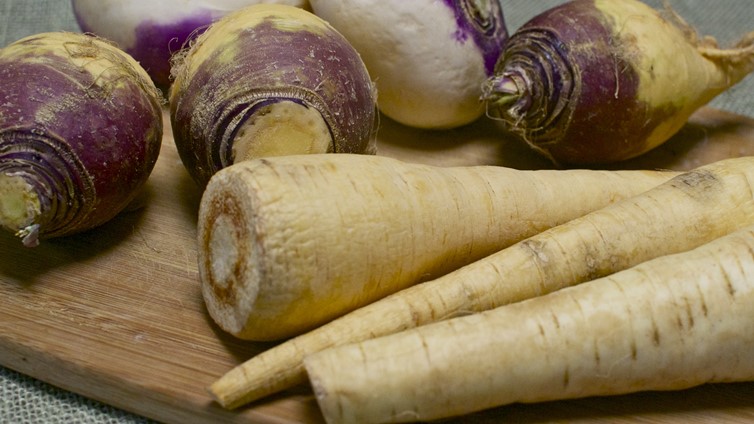 Creamy carrots. The best way to identify parsnips at a vegetable shop. Indeed, the resemblance between parsnips and carrots is quite uncanny. If you take a carrot and spray paint it with some creamy paint, you will find it hard to separate the two root vegetables. However, there is a lot of difference between the two vegetables, in terms of what they have to offer. If we had to make some sort of comparison between parsnips and other root vegetables, it would have to be based on taste and texture. Using these parameters as a reference, we can confidently say that parsnips resemble turnips more than any other vegetable from this group of plants.

The Glycemic index is a value that determines how quickly blood glucose levels are affected after the consumption of a particular food item. When we consider glycemic indexes, we find that parsnips are ranked much higher than the other root vegetables. This is an important and distinguishing feature of parsnips. Besides, it has a lot of importance in this discussion.

If you are looking for a simple, one-word answer, then yes. Dogs can eat parsnips. However, we are afraid that you need to have a bit of background knowledge before you add this root vegetable to your dog’s diet. There are certain points associated with the idea of dogs eating parsnips that need elaboration.

The nutritional value of parsnips 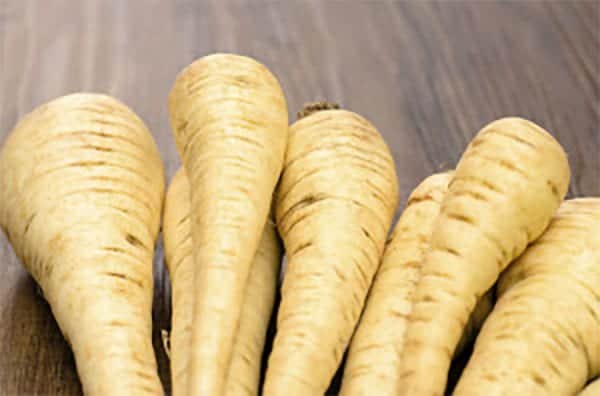 What do parsnips have to offer? Not only parsnips but this question must also be asked about every food item that you might or might not feed your Fido. Coming back to the parsnips, well they have plenty of useful nutrients to offer. Fiber, for one, is found in abundance in parsnips. Fiber has a crucial role to play, whenever the dog’s digestion is in question. However, too much fiber can certainly be not good for your dog. It can lead to minor GI tract discomforts, as well as loose stools.

Parsnips have vitamin B and C, both of which are quite important for maintaining normal body equilibrium. Apart from the vitamins, parsnips are also enriched with potassium, as well as certain antioxidants. Do these minerals and elements mean something to your canine’s health? Let us discover that in the next section. 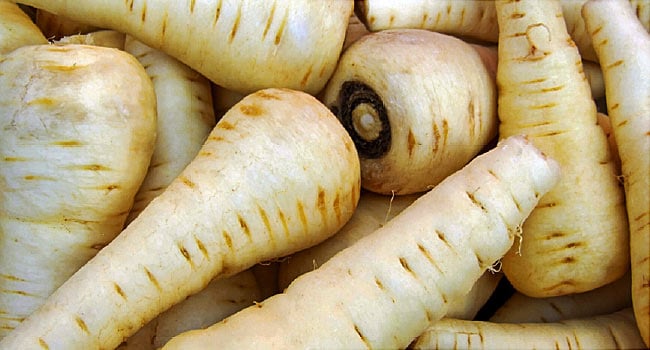 We have already mentioned the role of fiber in improving your dog’s digestion. It will only sound redundant if we went on about it, once again. No, there are certain other health benefits, which your dog can gain by eating parsnips. For example, vitamins. We said parsnips have vitamin B and Vitamin C. What do they do exactly? For keeping the process of cell division running smoothly, dogs need vitamin B. Not only that, but muscular health is also positively influenced by this vitamin, as is the process of metabolism. These are the roles that vitamin B is famous for. What about vitamin C then? Well, it acts as an immunity booster. Hence, your dog is at a lesser risk of inflammations and infections. Not only that, but vitamin C also helps to ward off diseases like scurvy.

It is no secret that potassium is crucial for stronger bones and muscles. The rule applies to both humans and dogs. If your vet gives you the bad news that your dog might be suffering from bone weakness, well, do not panic. Just find a way to add a moderate amount of parsnips to your dog’s diet. Free radicals can be a nuisance, contributing to several damaging diseases in your body. Parsnips have antioxidants to fight these diseases.

How to serve parsnips to your dog? 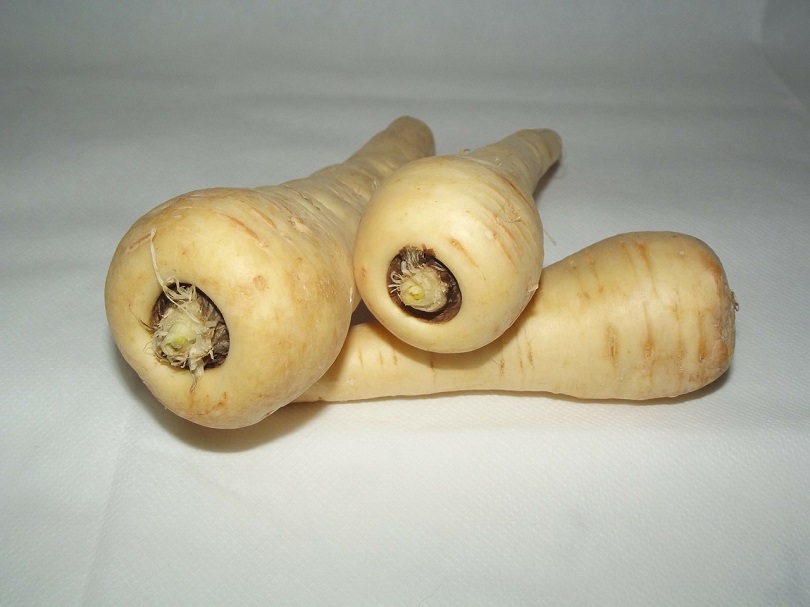 Well, all these health benefits must have had you gripped. The next important question to be answered is about the serving method. How to serve parsnips to your dog? First, you must know that most of the nutrients that we have just described are found, either on the skin of this root vegetable or just under the skin. Hence, you can understand why peeling this vegetable is not such a good idea. However, if you wash them properly, there is no need to peel the skin at all.

Raw or cooked? Well, both forms are ok with your dog. However, there are a couple of points to be kept in mind, regarding this. If you are giving your dog parsnips in the raw form, be careful about the chunk size of vegetables that you cut. Have you ever seen your dog chew the served food properly? Of course, you have not. The chunk size must be not more than your dog can swallow.

If you are cooking the parsnips, it breaks down the fiber. This is helpful for your canine friend, whose digestive system is not as adaptable as you take it for granted. Our verdict is in the favor of cooked parsnips. However, you must be careful. Overcooked parsnips can cause more harm than good. By cooking, we mean boiling the vegetable. Avoid the cooking oil, that stuff is nothing more than poison for your four-legged friend.

How many parsnips is ok for your dog? 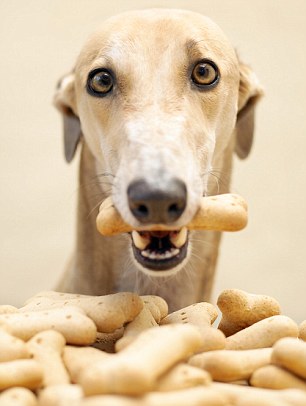 How many parsnips is ok? Frequency matters a lot. Please keep in mind that it is Terry the dog that you are feeding parsnips, not Terry the gym freak from your local gym. It has to be gradual and well thought. Whatever your dog is eating these days, add parsnips to that. Only a few pieces, or cubes as some call them. Raw or cooked does not matter, although you can watch the response and see which one your dog likes more. Do not think for a moment that quantity has to do a lot with the health benefits that we have discussed earlier. No, as long as it blends well with the regular meals, the quantity is ok. If you need more information on the subject, there is no one better than your dog’s vet to guide you on this matter.

The limitations of time and space force us to conclude this discussion. We wish that we could go on, but as Albus Dumbledore wisely said, it is pip-pip time! We do hope that you learned something, if not everything, from this discussion. We all love our Fido friends, do not we? It would be a shame if something terrible happened to them, simply because we were not careful enough with parsnips. Hence, it is best to apply the principles of moderation, whenever serving them parsnips!