Can dogs and cats mate be a question that you might have asked yourself on more than one occasion? You may have seen videos of cats and dogs mating but there has never been any evidence of offspring. This is because the mating of cats and dogs is unnatural and quite impossible.

These two pets belong to different genies so they can’t mate together, but they can mate with other animals that belong to their species. According to studies, animals that are of the same species can successfully breed. So breeding of cats and dogs is not possible because the cat’s ovaries and the dog’s sperms are incompatible. This means that if there is any chance the cat is impregnated by a dog, the baby won’t survive. So technically, dogs and cats can’t mate. The most common thing you will find is the breeding of cats and the breeding of dogs, but not both. 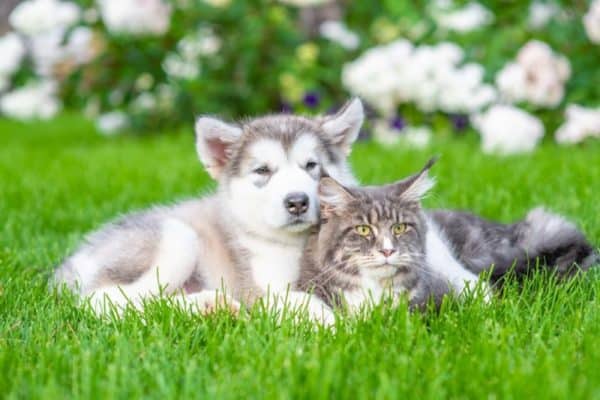 However, with advanced technology, a lab setting, and the right conditions, this can happen. You can try to cross the genes of a cat and try to splice them in a dog and vice versa, but creating a hybrid animal can find you on the wrong side ethically and morally. You might get one with characteristics of the other, like a dog with cat features or a cat that wags its tail. This kind of experiment doesn’t serve any medical purpose and although in most cases scientists have been successful in this kind of research, they only do it to satisfy their curiosity. But so far naturally, there has been no evidence that would indicate that cats and dogs can have babies. This is a clear indication that these two animals can’t sire babies together.

So, why do dogs try to mate cats?

Dogs have weird behaviors of trying to mount on anything like your furniture, cats, and even your kids. This mounting behavior is an everyday thing that you see in most dogs which is a sign of an animal that is on heat and wants to reproduce in the adults. This is also a behavior that you will find in puppies because they love to play a lot and jumping on each other’s backs is one way of playing, but this doesn’t trigger an erection in them. However, if you notice your furry friend has developed this kind of behavior, it’s a good idea to consider training to discourage it. Sometimes, you may find that a female dog is exhibiting this kind of behavior which could be due to a urinary infection, so it’s advisable to take her to be checked by a vet. 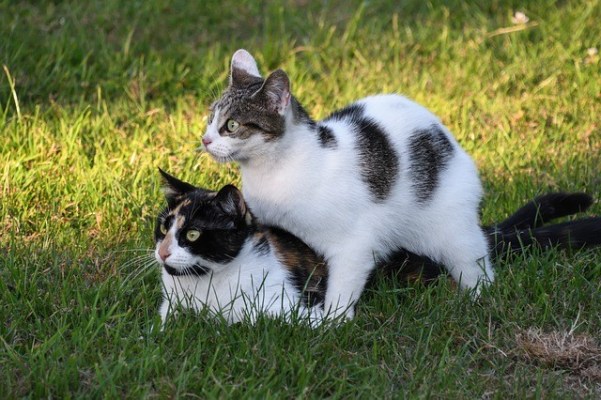 Cats and dogs have specific mating processes. It’s said that more than 50 thousand years ago carnivores that lived in North America were ancestors of cats and dogs, but they soon became extinct. This shows how unnatural their DNA mix is so there is a very low possibility of their offspring surviving. The physiological differences in cats and dogs make it impossible for them to mate because they can’t respond to each other’s mating signals and they don’t have any attraction between them. The only way they can mate is through gene manipulation. Because these two animals aren’t in the same species, they can’t have offspring. Animals like horses and zebras can get offspring, but they’re usually sterile. A domestic dog can have viable offspring with another adult canine like a wolf.

Cats and dogs have very unique mating rituals which have some similarities like for example, they both go on the heat a few time a year, the female can only be impregnated by one male, and their gestation period lasts for 66 days giving birth to a litter of between 4-6 kittens or puppies. The main difference being obvious now, these two animals can’t produce offspring. They’re simply not attracted to each other and their reproductive organs are designed differently. When the genus is different as well as the species, there can be no reproduction.

Here are some examples of species that have mated successfully 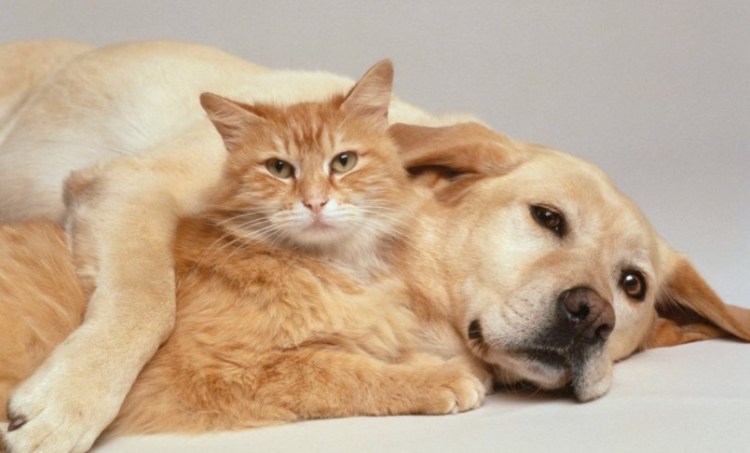 Hybrids are a result of mating animals in the same species which will give you different forms of hybrids like genetic, structural, numeric, and permanent hybrids. Hybrids can be found in both animals and plants. Mammals like birds, fish, and reptiles have hybrids like a mule which is a crossbreed between a donkey and a horse, and even plants also have hybrids that are a result of combining different elements.

So, can dogs and cats mate?

As much as you would like to satisfy your fantasies, cats and dogs can’t produce offspring conventionally. The only possible way is through genetic modification and even if this is successful, the hybrid will have serious health problems with a very low chance of survival. These two animals belong to different species and genus so there is no need for genetic manipulation. Creating a hybrid will be unnatural and it won’t benefit you in any way. If this process happened naturally, it would be a beautiful thing, but forcing it isn’t right. This is how nature intended things to be and you should just enjoy animals and plants as they are.

You shouldn’t mess with nature or try to correct it because everything is perfect as it is. Cats and dogs are unique and beautiful just as they are and you need to love your pets with their unique differences and appreciate them equally without feeling the need to make them better.