As the name suggests, watermelons are a prominent source of water and various nutrients. Thus, these refreshing fruits can not only be excellent for us but also for our feline friends. Nevertheless, when talking about foods, cats are known to be quite picky. Hence, they generally follow their regular diet. But, if you insist on them eating watermelon, they might consume it out of curiosity.

However, a cat’s body works differently than humans. Therefore, you would have to be a little bit careful before feeding watermelon to your furry partner. Besides, you should always take some precautions to keep your cat healthy. 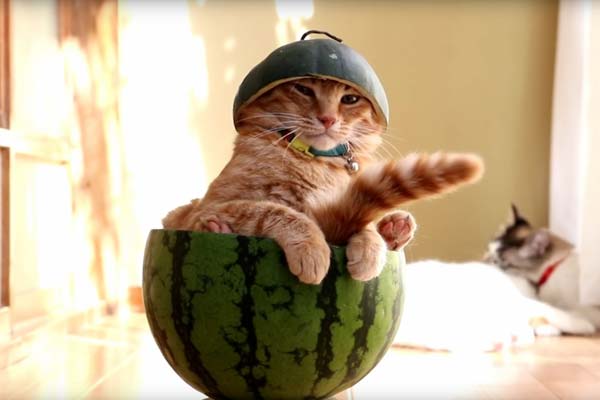 As mentioned before, watermelons generally come with a lot of components that can be beneficial for both humans and cats. Here are some of them.

1.An Excellent Source of Water

If you have been a feline owner for a long time, then you might have seen that your cat does not really drink that much water. It is actually how they have adapted to nature. However, drinking fewer amounts of water can, sometimes, cause dehydration to your cat. If your kitten always stays dehydrated, then his or her kidney might get affected, which, in turn, can lead to kidney diseases.

So, like many cat owners, if you are, too, concerned about this, then opting for watermelon can be an excellent idea for you. A watermelon contains almost 90% of liquid components. Therefore, if your cat eats it regularly, then he or she will definitely stay properly hydrated. 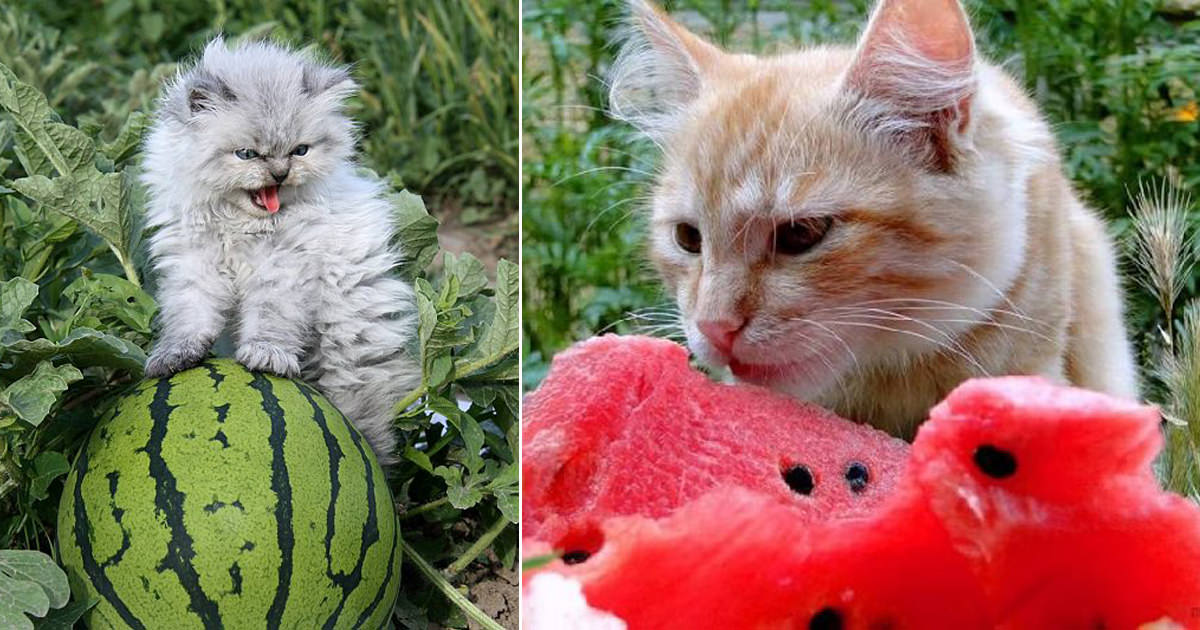 Fibers are one of the healthiest components, which help in keeping our and the cats’ stomach and intestines healthy. Hence, most cat owners, as well as veterinary doctors, consider fiber to be a significant part of our feline friends’ diet.

However, most of the types of cat foods generally do not contain many fiber components. So, those cats, which eat these foods daily, tend to get constipated a lot more than usual. Moreover, eating cat foods regularly can also damage a cat’s liver as they contain a lot of fatty content.

This is yet another case, where a watermelon can be helpful for you and your cat. Watermelons generally offer almost 0.5 grams of fiber per two cups, which is quite decent. 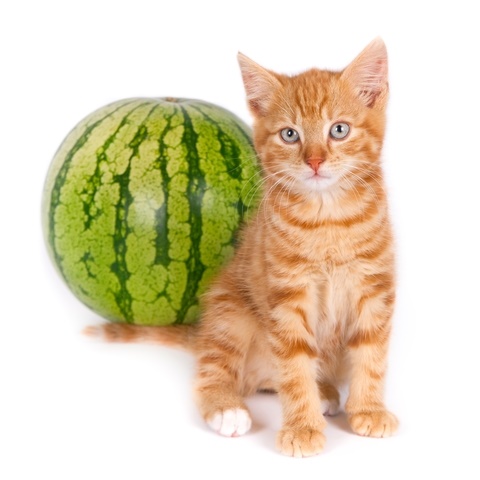 Besides the lack of fiber, cat foods also do not contain that many vitamins and minerals. On the other hand, the watermelons are known to be quite enriched with both vitamins A and C, which are quite important for a cat’s health. Aside from that, these fruits are also packed with various minerals, such as potassium and magnesium.

Numerous studies in this context have also shown that eating watermelon regularly can also help to keep a cat’s heart and bones healthy.

Almost any types of domestic animal, especially cats, are prone to external swellings. Moreover, if it eats cat foods frequently, then internal inflammations might occur too. However, this is yet another case where watermelons can be beneficial for your cat.

Watermelons are rich in anti-inflammatory antioxidants, such as lycopene, which help in lowering the occurrence rate of internal inflammations. On the other hand, vitamin C in these fruits also aid in reducing the risk of external infections and swellings.

The cats generally love to eat high protein foods, such as meats. These food items contain a high amount of amino acids, which are significant for their growth. However, meats are also enriched with fatty components. Therefore, if your cat eats these on a daily basis, then he or she might become overweight, which, in turn, can lead to various other diseases.

Contrarily, the watermelons are quite low in calories. So, they can help your cat to maintain its weight.

What Are the Concerns About a Cat Consuming Watermelon? 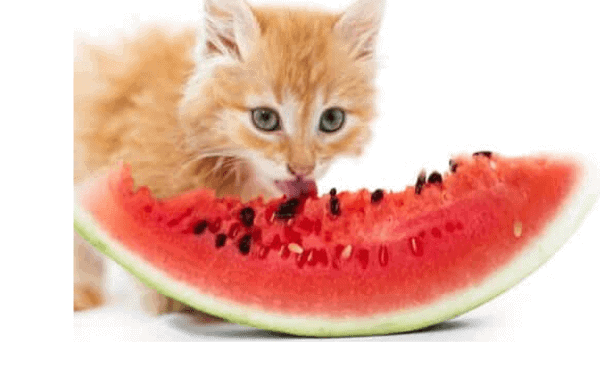 As you already know, the body of a cat generally works differently than a human. Therefore, you should always be concerned about a few things before feeding watermelon to your cat. Here is what you need to know about them.

While feeding your cat, you should always be careful with the seeds. The seeds of watermelons contain poisonous components like cyanide. So, if your cat eats the seeds even once, it can lead to severe diarrhea and vomiting.

In severe cases, your kitty might also require blood transfusions to get the poison out of its system. Besides, as the cat’s stomach cannot digest seeds, it can block the kitten’s intestine.

So, before letting your cat eat a watermelon, make sure to remove all the seeds from it first. Also, to be safe, you should give the fruit a quick rinse before feeding it to your feline friend.

2.The Rind of a Watermelon

Unlike watermelon seeds, the rind of watermelon does not cause severe sickness. However, it might be somewhat difficult for your cat to digest it. As everyone in the feline group is known as obligate carnivores, they generally lack those enzymes, which can help to break down some plant components. So, before you feed a watermelon to your cat, do not forget to cut off its rind appropriately.

3.The Risk of Diabetes

Like most glucose-friendly fruits, you would also have to be careful about the amount of watermelon that your cat is eating. As watermelons generally contain a high amount of glucose, they can increase the risk of diabetes in a cat.

Due to these reasons, the doctors also ask the feline owners not to feed watermelons to those cats who already have diabetes.

What Are the Symptoms and Signs of Watermelon Toxicity in Cats? 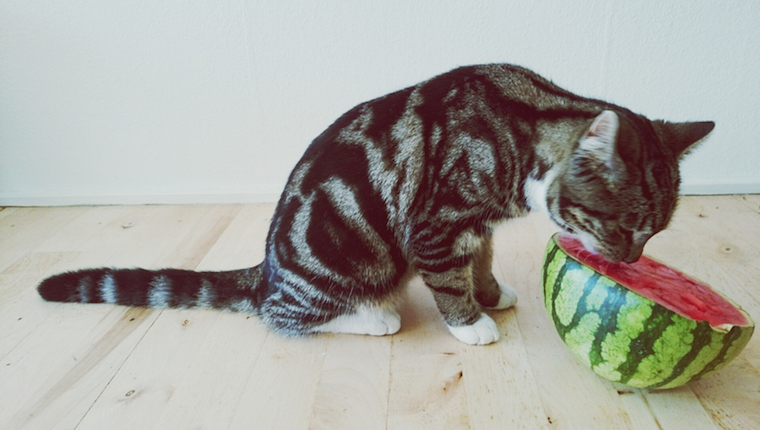 The following are some of the signs and symptoms of watermelon toxicity in cats.

Most of the symptoms of watermelon toxicity generally continue for a long time. So, you should always treat them as quickly as you can. Also, if your cat is showing these symptoms, then you would also have to stop feeding him watermelons.

How many watermelons Should A Cat Eat? 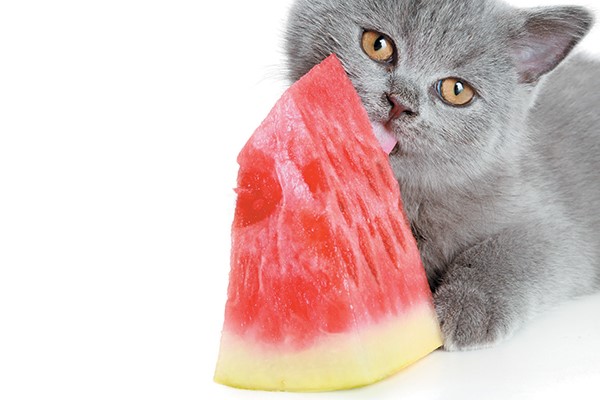 If your cat is not diabetic, then it is safe for him or her to eat watermelon. Nevertheless, to avoid any kind of inconvenience, you should always give your feline friend a small amount of fruit. It would be best for both you and your cat if you feed him this fruit occasionally.

Also, as stated earlier, cats are a type of carnivorous animal. They do require a high amount of protein components to grow up properly. Hence, watery fruits, like watermelon, are not really that suitable for their dietary requirements.

According to veterinary doctors, a cat should never eat more than 20 grams of watermelon per day. Otherwise, the glucose level in his or her body will increase quite massively, which, in turn, can lead to diabetes.

Also, due to the lack of some enzymes, the cats cannot digest plant-based foods that quickly. So, if you feed watermelon a huge amount, then it might also affect her stomach severely.

Precautions to Take Before Providing Watermelons to Your Cat 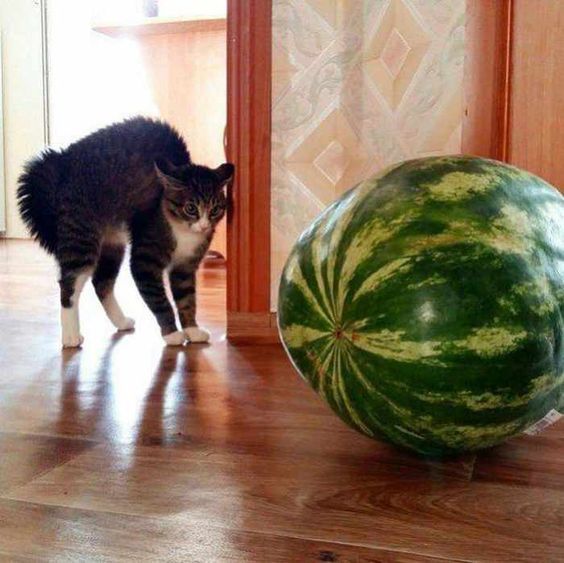 If you want your cat to be healthy and lively, then you would always have to be cautious while feeding him or her watermelons. Here are some precautionary tips that can help you with it.

Watermelon is one of those rare foods, which are safe for both humans as well as cats. They are quite high in liquid, which can help to keep your cat healthy and properly hydrated. Moreover, the fruits are also enriched with fibers, vitamins, and minerals. So, they can also help to keep inflammations and infections away from your cat. The only thing you should do is following the precautionary tips, and you are good to go.